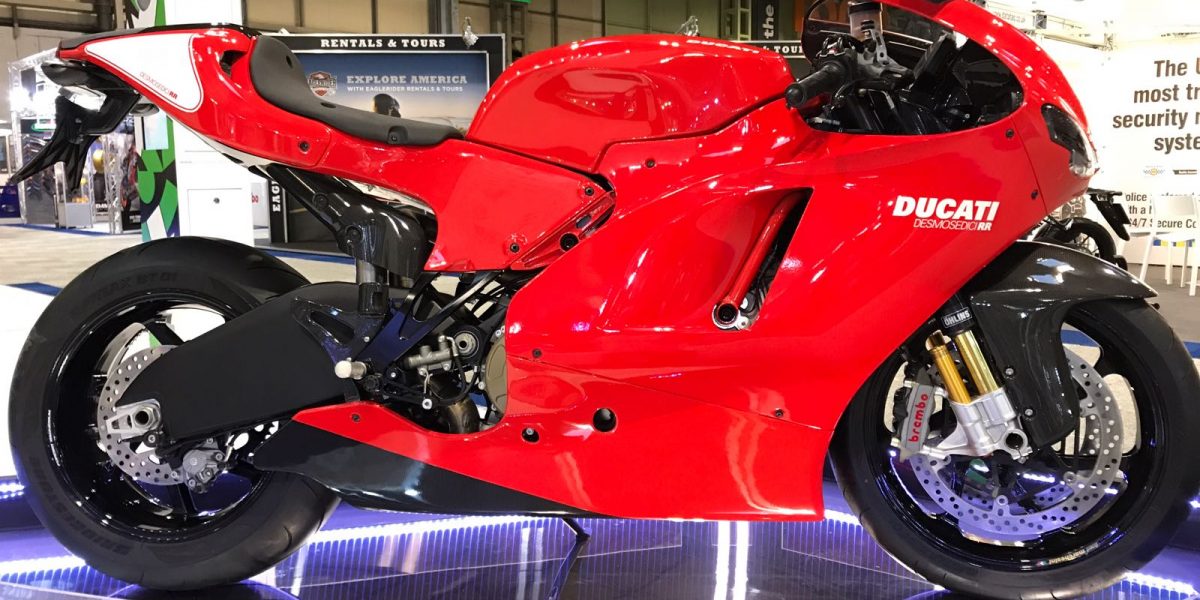 A “fresh-from-the-box” Ducati Desmosedici RR has proven an early hit with bikers at Motorcycle Live.

The rare and pristine road-ready V4 has taken pride of place on the Principal Insurance stand (Hall 4, 4B20). It soon attracted admirers as bikers spun through the turnstiles at what is the UK’s biggest motorcycle show. 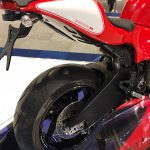 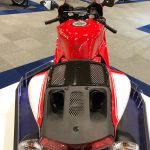 It launched with a £40,000 price tag, with existing owners of Ducati’s 999R getting first dabs. Needless to say, despite it’s punitive cost, this mighty machine nonetheless flew out of the showrooms.

Why? Because it’s simply brilliant.

An awestruck MCN opened its review with a bold statement:

“There’s no other way to describe the Ducati Desmosedici RR than as a MotoGP bike with lights; it really is that close to the real thing.”

It’s based on the 2006 GP6 bike ridden by Capirosso, Giberno and – for one round – Bayliss in the MotoGP. That sees it sharing its track sibling’s stiff chassis, carbon fibre bodywork and, yes, that incredible 989cc V4 engine.

As you might expect, it goes. And some. Those lucky enough to have ridden one report that desmodromic motor delivers power smoothly yet with increasing intensity as you work through the revs. Few, if any, though, are likely to have pushed it to its 188mph limit.

It really looks the business too.

The bike we secured for our stand is particularly special. Purchased at auction by a private collector earlier this year, it has only the dealer’s PDI test mileage on the clock. All six of them.

It was sold by its one careful owner replete with all its original books, tools, data analyser, battery charger – the lot.

As secondhand bikes go, they don’t come more mint than that!

Slam in the Lamb

Talking of mint bikes, we’ve also brought Larry Houghton’s Lamb Chop II back to the NEC. The reason? We’re not sure we needed one, but 2017 does mark the 10th anniversary of this brilliant bike picking up the Custom Xtreme trophy.

It’s an extraordinary piece of engineering, borne of one custom biking’s most creative minds. 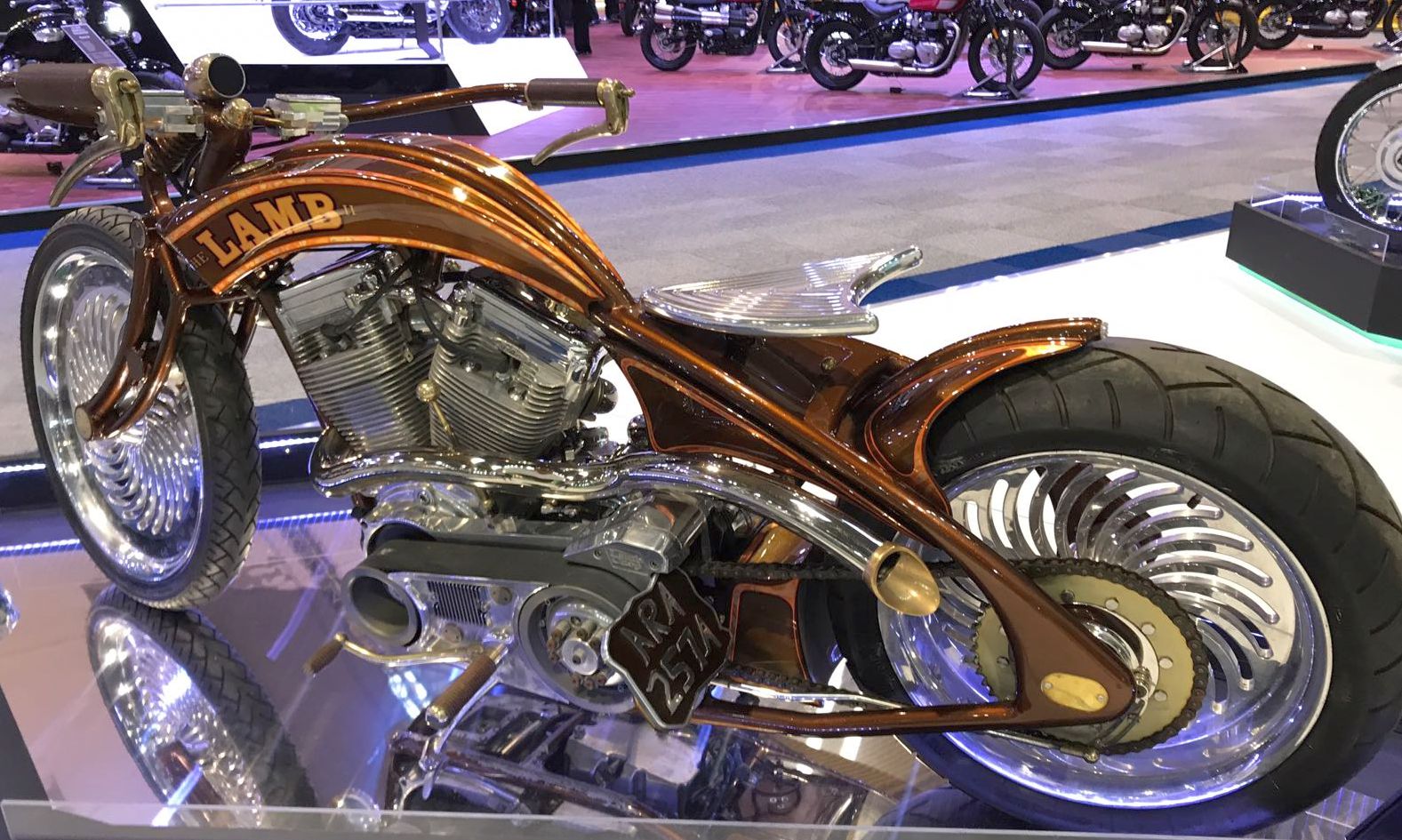 Pretty much everything you see, was designed and created by Larry in his Salisbury workshop. The 88 cu in Revtech motor and five speed Dyna Glide transmission are stock, but everything else is a one off.

Another eyeball-pleaser is this stunning 1959 Tangerine Bonneville.

This is the bike that made Triumph’s name.

This iconic machine was launched on the back of Johnny Allen’s word speed record breaking antics on the Salt Flats in ’56.

Whilst rightly recognised now as a true classic, reaction on its US launch was pretty muted. 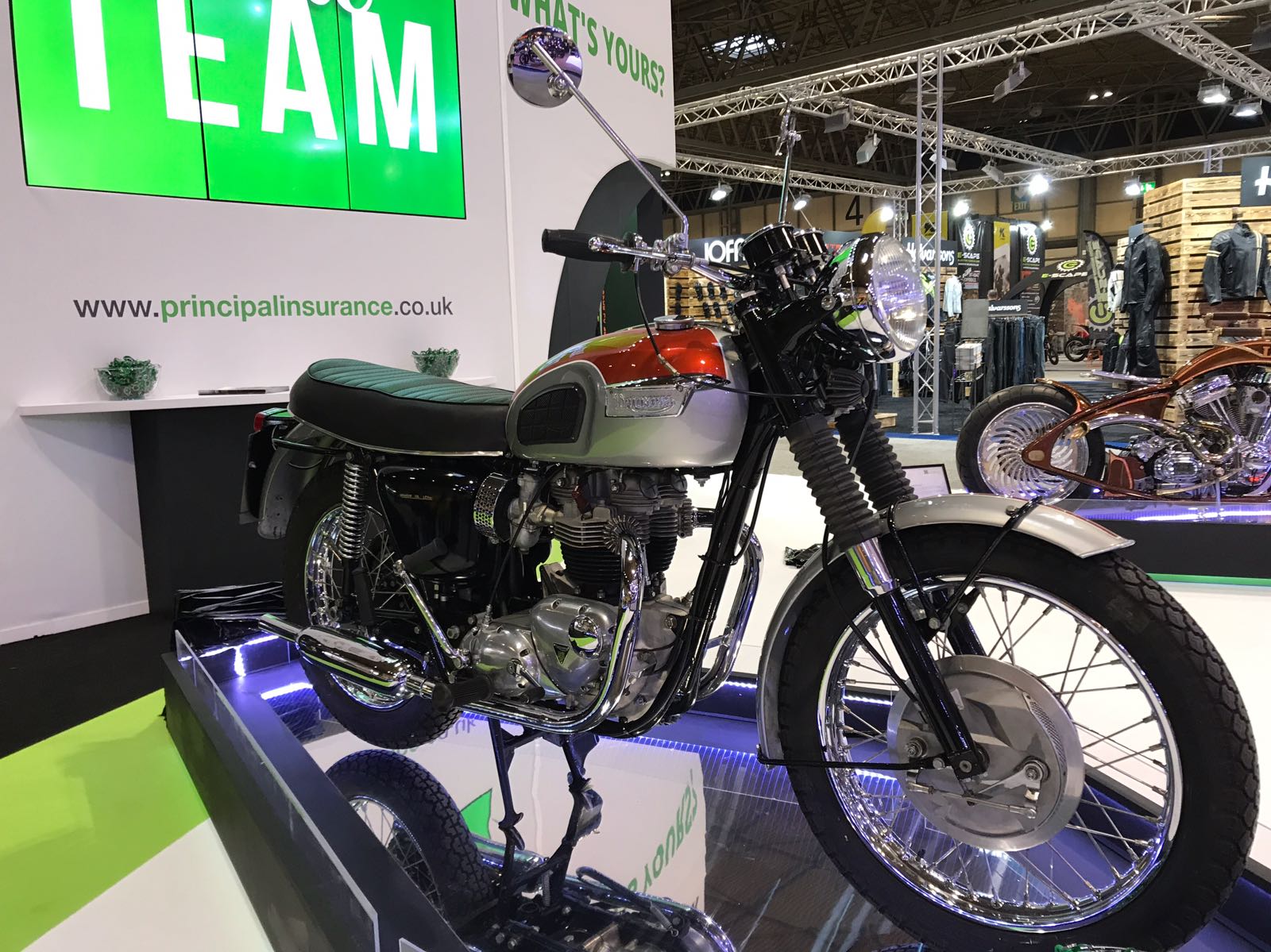 Yes, that 650cc parallel twin with Amal monobloc carbs and high performance camshaft might have enabled a then impressive top speed of 115mph , but……

Back in the day would-be buyers baulked at what was basically a modified Tiger simply not looking the part. Physical aesthetics and that colour aside, they also pointed to the fragility of its frame, front brake, forks and swingarm. Not ideal if you really wanted to test the capabilities of that engine.

Whilst early reaction was lukewarm and the debut Bonny soon superseded by the larger capacity T140, the Tangerine Dream is now sit among the most sought after of classic Bonnevilles.
You can see why.

Not so mellow yellow

So, what else is turning heads on the Principal stand?

Well there’s this lovingly restored and ultra-rare Kenny Roberts F1 replica.
Into Bikes’ Patrick Allen rescued it from a shed in which it had languished for more than two decades.

Rescued from a shed in which it had languished for more than two decades, this ultra-rare Kenny Roberts Yamaha F1 replica was lovingly restored by Into Bikes’ Patrick Allen. 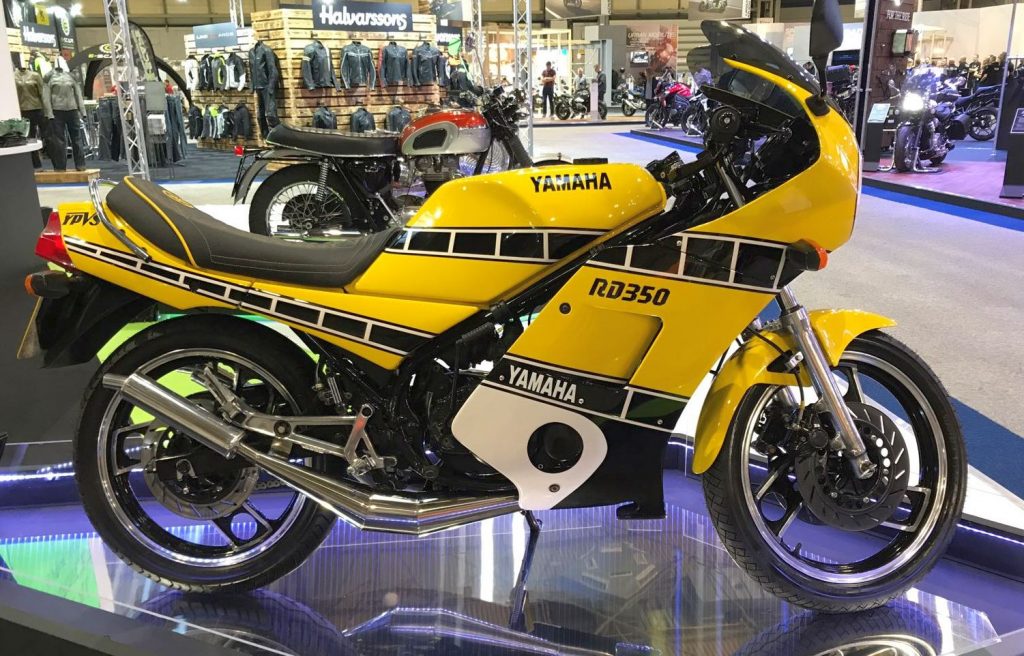 He fully rebuilt its liquid-cooled parallel twin, a motor which benefits from extra low rev torque courtesy of then cutting technology. We speak of the variable exhaust port valve YPVS aka Yamaha Power Valve System.

The Derbyshire mechanic also replaced the crank and pistons, repaired or exchanged all the plastics and handled the powder coating and colour restoration.

This model is thought to be the rarest RD350’s produced, having been manufactured for just seven months. Those that did roll off the production line were also destined solely for Roberts’ home market in the US.

Allen, who’s done his research, reckons this one of maybe half a dozen that remain.

Be prepared for this Scout

Of course, biking life is not all about classics and modern-classics.

Bringing us right up to date is Indian’s new Scout Sixty.

OK, its Art Deco-ish stylings hark back to Indian’s original heyday, but this is no 20th century throwback. It’s a thoroughly modern lightweight cruiser. 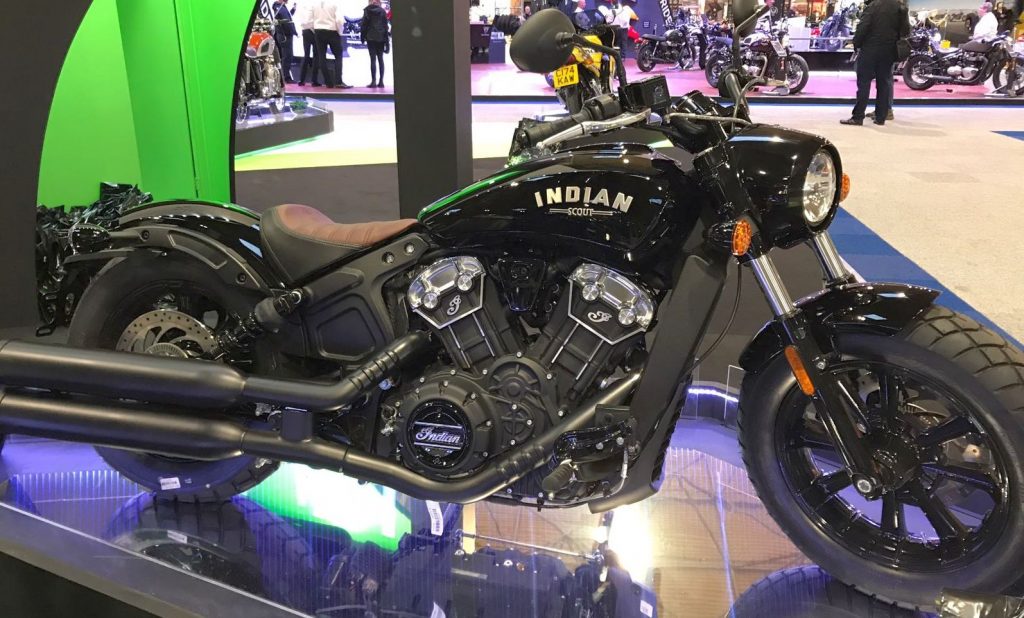 The 60cu. in. liquid cooled V-twin – from which the Sixty takes its name – measures 984cc in new money and kicks out peak torque of 88.8Nm at 5600 rpm. Whilst its 78 horses won’t win prizes on the salt flats, it’s plenty for the kind of urban cruising at which this bike excels.

Dual shocks on the rear and a 120mm telescopic fork up front, contribute to a smooth ride made all the easier by the Sixty’s relatively low wet weight of 546lbs.
Being a modern Indian, it’s price is equally trim.

The entire Explorer range has benefited from a serious makeover, with major tweaks to engine and chassis and the introduction of a raft of technological enhancements. 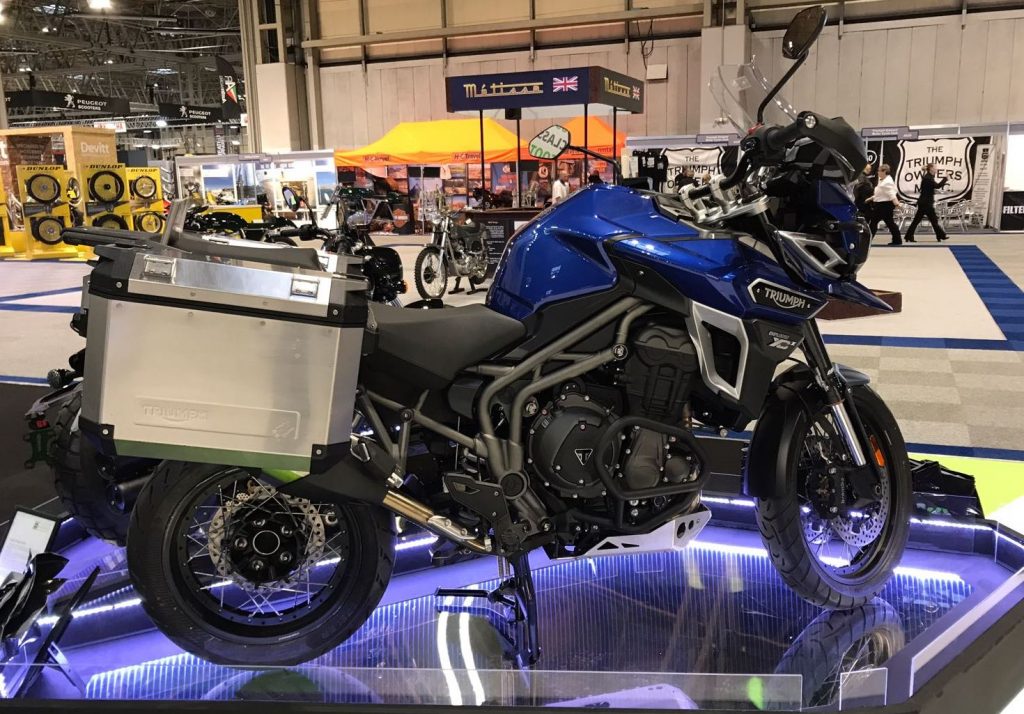 Might is complemented by Triumph’s Semi-Active suspension system, itself supplemented by a WP electronic suspension and Brembo monobloc calipers. Having also shed some 10kg, it’s said to be an agile beast, as comfortable on the tarmac as it is chewing dirt.

Neither does it shirk on tech, the box of tricks including six riding modes – with a dedicated off-road option – six axis IMU and Optimised Cornering ABS and traction control.

Our very own Diavel marvel

Completing our NEC line up is this Principal bedecked Diavel.

But this second-generation Ducati Diavel isn’t just for show.

This is Principal bike insurance advisor Mike Sinclair’s company vehicle, a machine which on its launch left MCN “absolutely blown away.” So, quite a perk of the job then! 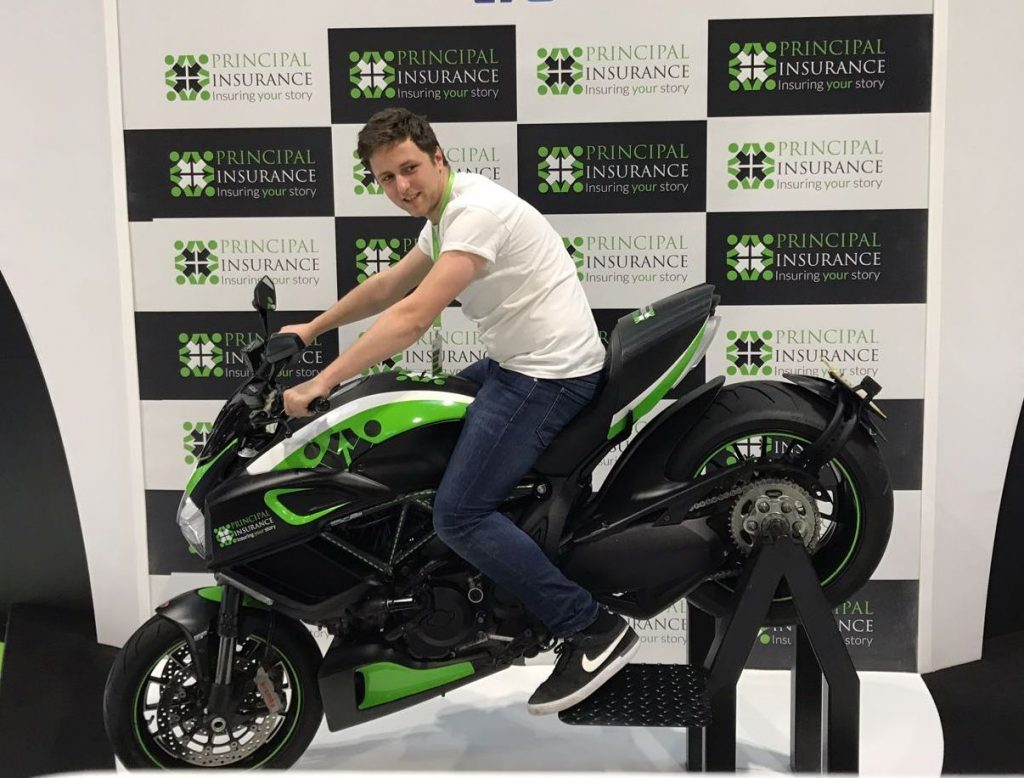 You can hop on our Diavel for a quick selfie!

It’s navigated via a six-speed transmission and wet, multi-plate clutch and delivers a claimed top speed of 170mph.

The standard Dark Stealth trim of Mike’s 2016 model has been complemented with Principal Insurance decals and styling created by Manchester’s Digital Revolution.

Visit our stand and you can hop on and capture the moment with a quick selfie!

So, how did we get here?

What we mean is, what was involved in our preparations for Motorcycle Live and creating a stand which we hope you’ll visit and be blown away by.

If you’d like just a little insight, then check out this Behind The Scenes video which our good friend The Missenden Flyer prepared earlier.

Then why not pop down to Hall 4 to check out those fantastic bikes and our mighty video screen presentations. The Principal posse will be happy to discuss any bike insurance questions you have, whether you ride a custom, classic, scooter, moped, trike or whatever variety of modern motorbike!

You can also pick up a free goodie bag which includes the fabulous Principal Insurance 2018 calendar featuring magnificent metal, both old and new. You can get a taster in this video, caught as it rolled off the presses.

So what are you waiting for? Get yourselves NEC bound – we look forward to seeing you there!